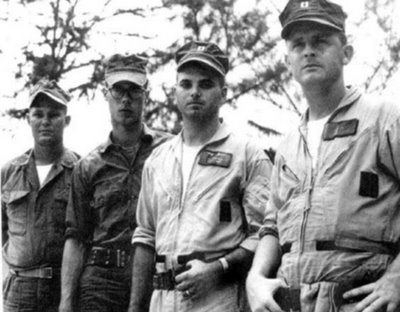 The Marine Corps League’s 4th Annual Heroes Among Us Speaker Series – Medal of Honor Huey Gunship-RVN Night – Guest of Honor – Capt. Rupert "Skeets” Fairfield, USMC, Navy Cross Pensacola, Fla. – The Cpl. J.R. Spears Detachment of the Marine Corps League announces its 4th Annual – Heroes Among Us Speaker Series – MoH Huey Gunship RVN Night – scheduled for 29 September 2016. The MCL intends to honor all the members of the most decorated helicopter flight in the Vietnam War and all helicopter pilots who served in the Republic of Vietnam. The Guest of Honor is Capt. Rupert "Skeets” Fairfield, USMC, Navy Cross Rupert Fairfield is a local hero who resides in Milton and he is the last available eye witness to the historic 19 August 1967 flight which resulted in the Medal of Honor for Major Stephen Pless, USMC and Navy Cross awards for each of the other three crew members. As the co-pilot of a UH-1E helicopter in August 1967, Fairfield participated in the rescue of several Army soldiers who were being attacked by about 40 Viet Cong on the beach. The soldiers were being beaten and bayonetted when they arrived on the scene. After several low-level attacks to chase off the enemy, Fairfield, then a Captain, left the aircraft to go to the trapped soldiers rescue. He pulled a machine gun from its mount and used it to drive off some of the Viet Cong, shot others with his pistol and managed to help carry three of the wounded Army soldiers to the helicopter. Finally he ran to save a fourth soldier; wherein he again met heavy enemy fire, only to discover that the man was already dead. Fairfield returned to the helicopter, which was damaged and overloaded. Fortunately the Huey was able to take off and fly out over the ocean away from the enemy fire sometimes only 10 feet above the waves. The three rescued soldiers were eventually given medical attention and managed to survive their ordeal. Lt. Col. (Ret) Fairfield’s personal awards for combat valor include: The Navy Cross, the Distinguished Flying Cross and Air Medals.
Back to Blogs